Playscript Analysis 2005 * Use http://vtheatre.net to link to Virtual Theatre pages!

Something which makes us remember, something whihc preoccupies our mind... and holds together what we saw. You see, STRUCTURE!

What does it mean? We are looking for reasons, we are built this way, our mind keep asking questions like this three-year-old semi-toddler. We are uncomfortable when we do not understand -- we have to know the motivations (characters) and the logic (events, plot)... Drama is based on this embebed in us ability for constant questioning. If I do not understand, I lose my interest.
The more I understand the more I get involved. That is the secret of all great plays.

We deal only with the great plays in our classes. The answers are in there. We learn HOW to READ the MEANING. How? Through understanding the FORMS (character, plot, exposition, scene, monologues, etc.) -- we have to study how the meaning is formed. There is no Meaning without Formalization of it (Expression of ideas).

The last structural principle, the trickiest: Idea or Message or Thought or Meaning. (Of course, this principle may be seen as the first or even the main one out of the three).
Important: without understanding plot and character(s) any analysis of the meaning of the play is meaningless.

The meaning can be seen only in observation of the entire play, reading through the deasing of composition (beginning, middle, end = exposition, climax, resolution).

Keep in mind that Aristotle define the other three (Language, Music, Spectacle) as texture!

Perhaps, the most complicated.
Long before we discovered "ideology" Aristotle pointed that there are no stories without meaning. Aha!

The relations between the three: plot, character, idea. (Back to Spectator Theory).

"Idea-oriented" scripts. Titles. (You have to have several levels of interpretation)

Epic Theatre, Documentary, Political Performances. Elements of it always present in every play. The most visible presence of ideology; history is charged with the specific ideas, that makes it PERIOD (time, era, etc.). 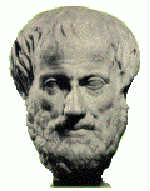 Use "3 Sisters" for demostration of topics "Art and Culture" and "Art and History" -- personal ("author theory") ideology. Show, collective memory and reflections. Memory and remembering, unfinished past.

The conflict between Art and Culture (Pop-culture made it visible -- "Pure War"). Experiencing Art. culture is belonging, identity.

History without Art? Art of Technologies. Science and Art. The American Age and the Idea of Revolution. New Chronotope -- time-space.

Aesthetic Living is above Moral Existence (Nietzsche). What is ahead? Postmodern forms of post-idelogical thinking. Living as Art. Individual and Society; total and global environment.

Style: The distinguishing characteristics of a play that reflect conventional practice. - what are the conventions (agreements) and how are they treated? (Marsh Cassady, in Theatre: An Introduction [Lincolnwood, Il.: NTC Publishing, 1997], p. 28, calls "conventions" "devices the actors, the playwright, the designers, or the director use to expidite the production. An audience willingly accepts and expects such devices as a type of shorthand.")
Styles are usually associated with a period or with an "-ism."

idea, theme ("the me") of the play.
often allegorical or symbolic
sometimes direct, sometimes indirect.

Plays may often be written about an idea, but the playwright will probably focus more on plot and character to get idea across -- plays are seldom about an idea. (Brecht, Pirandello and Beckett)

An online course supplement © Film-North * eCitations *
Copyright © 2005 by vtheatre.net. Permission to link to this site is granted.